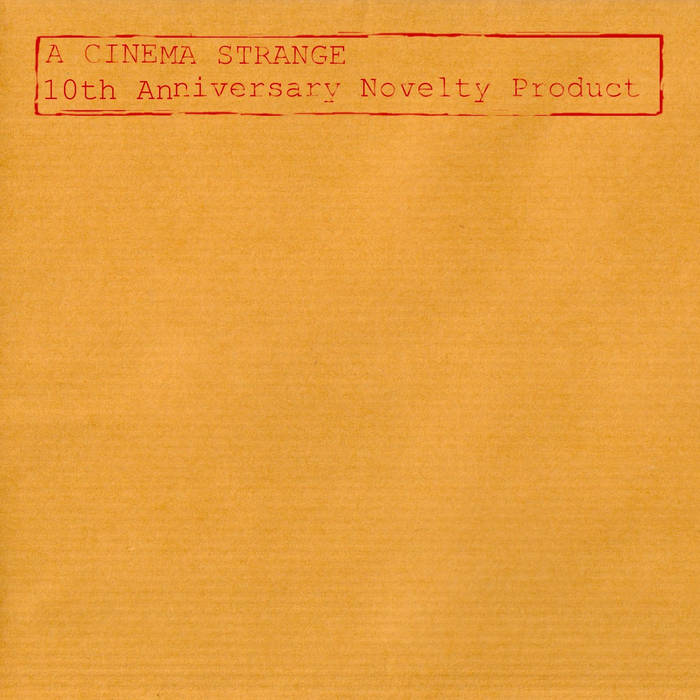 KirE Hughes This is like manna from Heaven! Thank you! Favorite track: Sadist Sagittarius (2004).

Released in 2004, the Novelty Product was essentially a double EP, with the first five tracks being new recordings of the original demo tape recorded by the band in 1994, followed up by those original recordings. However, the "strictly limited" (Trisol) special package included a booklet, a fold-out poster, a sticker, four postcards featuring band photos from 2001, 2002, 2003, and 2004, respectively, and a mail-in postcard fan survey, pre-addressed to the band's erstwhile PO Box in Somis, California. This postcard was entitled, "The Cinema Strange Novelty Survey Card" and read as follows:

The booklet, besides the usual album credits, included another band photo, instructions on how to make a "Cinema Strange Paper Hat", and the following (the redacted sections appeared as blacked-out text):

“I had known Colin, Danny and Lucas from about my junior year of high school. Danny and Colin were in a dark surf rock band called the Necrophiles that I was really into, kind of reminded me of the Cramps. We all shared an interest in music with a deeper darker sound. Bands like [REDACTED], the [REDACTED], [REDACTED], [REDACTED] Kennedy's and the like. I don't know if they ever realized it (or if maybe they were thinking the same thing) but it was at some point in the beginning of our school year of 1993 that I thought to myself, ‘I need to start a [REDACTED] with these guys’. That Halloween our friend [REDACTED] was having a party, like he usually does, and I innocently suggested that we should form a Misfits cover band just for the party since we were already dressing as a gang, the droogs from Clockwork [REDACTED]. I had hoped that in putting the set together and practicing the other guys would realize we had a [REDACTED] that worked.

“At some point it came out that Lucas was not interested in singing Danzig's parts and as drumming was the only thing I could do besides play bass (Lucas also played drums and it was his drumset that I used until I finally bought my own for the band) he decided to step out of the performance so our Misfits-crazed hessian-esque friend Dave could sing. Halloween went [REDACTED] and we continued to [REDACTED] after that.

“At some point during the [REDACTED] of the next year it must have been [REDACTED] that we start a project because our first official practice was on Febuary 2nd 1994. I think we made up ‘Teenage Frankenstein’ that day.

“I believe it was at one of these early group practices that we (Danny, Colin and myself) gave Lucas his first [REDACTED]. His [REDACTED] at the time had loved his long [REDACTED] and looking back I think it was our way of claiming Lucas for ourselves or possibly letting [REDACTED] know that [REDACTED] would at least have to [REDACTED].

“It took us awhile to come up with a name and I think finally it came down to the Brides and Cinema Strange. Liking the idea of a name related to film and hating names that start with ‘the’, my [REDACTED] was cast.

“The next months were spent [REDACTED] and [REDACTED] for performances and taking our sound from a dark punk to something bigger and more complicated. While Danny and Colin did most of the [REDACTED], we all contributed to [REDACTED].

“One day when I was hanging out at his house, Danny played a bass line for me, from a new song. He was wondering what I would add to it. I immediately heard a kind of counter melody guitar part. Inspired, we worked out the rest of the song that afternoon with this guitar/bass interplay in mind. That song was ‘the Nocturnal’ and it and ‘Golden Hand’ are probably my [REDACTED] from that era.

“A funny story from the recording session (that we did with Bob Reich (in my bedroom) that would lead to this EP: Colin, Danny and Myself laid down the music and left to get a [REDACTED] or something while Lucas laid down all the vocals. When we got back my dad was asking if Lucas was OK. The [REDACTED] had called him and said he heard someone in our house crying and wailing and wanted to make sure everything was OK there. ‘Crying? No Lucas is in there singing our songs.’ I don't think they understood [REDACTED] we were trying to [REDACTED].

“That summer I left for [REDACTED] and I think they got Danny's brother James to play drums. Even though I couldn't be with the group physically I always kept in touch and [REDACTED] when I could.

“One of my proudest moments with the band was actually after I had left, when Lucas and I put our money together to put out Cinema Strange's first release. We wanted to [REDACTED] so we put it out on clear vinyl. It was a 7-inch with ‘Hebenon Vial’ as the A side and ‘Mediterranean Widow’ as the B. Clear vinyl... fucking [REDACTED].