Album- "An Entire Wardrobe of Doubt and Uncertainty" 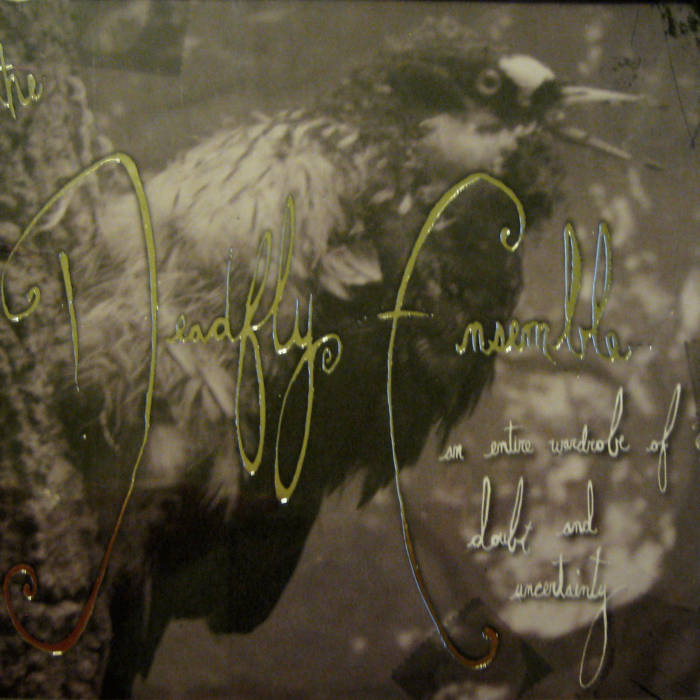 "I have in my possession the premiere release of The Deadfly Ensemble’s An Entire Wardrobe of Doubt and Uncertainty. I was, of course, the last person to receive it. Like the last person picked for teams in Dodge Ball. Still, it’s better late than never and better than not being picked at all.

Deadfly Ensemble goes where no Cinema Strange has gone before. It is a collection of thoughts and dreams, nightmares and sounds. Less rock and more art, it’s a musical look inside the gurgling mind of Luc Lanthier. The difference is, you either get it or you don’t. Chances are, if you’re reading this review, you already get it and probably already have it.

The Deadfly Ensemble is Luc Lanthier’s gift. As they say, art is perspective. What is beautiful to one person, is hideous to another. Sometimes it’s both. Sometimes it’s poetry. On the track “A Million Flies” Luc’s voice is echoed and duplicated and re-recorded over…one might imagine that the homeless man on the bus bench hears something similar. When he talks to himself, he’s responding to this song. I’ve often wondered if perhaps Luc has managed to tap into the dark recesses of his mind, scraping off the black and setting it to music.

This album, while the heart beats of Luc Lanthier, is a collaboration of artists including Andi Sex Gang. For years, Cinema Strange has been compared to Sex Gang Children, so it seems only fitting that Luc could work with Andi. While the entire album is divine, the closing song “Kriminaltango”, (a German Schlager song, duetted with Sex Gang) is the shining example, the apple of this CD’s eye.

There’s no doubt that Luc’s skills as a musician have blossomed. You get the impression that he isn’t trying to be anything, he just is. The true artists are nothing more than the sum of their art. The sum of Luc’s art is boundless and infinite. He’s tapped into something here. It goes beyond experimental art music and into the stuff of drama and tragedy, minstrels and death, poetry and song. Planned or not, it’s sublime.

This 2 CD release comes with what is being called a “Behind-The-Scenes Featurette”. A separate CD that is meant to be akin to a radio drama. It’s about an hour long and I listened to about 15 minutes straight and scanned the rest. I actually think I’m missing something. There are various voices in the background including Luc and Andi Sex Gang. Several vocal tracks are laid over one another and I couldn’t separate the voices to acquire a single, uniform, theme. I imagine that Luc and company are listening to the album and commenting on their ideas, the production, etc. It just came off as garbled mess. At first I thought it was a DVD, but it’s just an audio track. The audio itself lapses into audible and inaudible. Rather than commentary, it appears to be just a bunch of guys talking. Perhaps like the album itself, the commentary is an exercise in the strange. I guess if you’re into that, it’s cool.

Commentary aside, this has got to be my favorite release of the year. Instances of German film noir mixed in with Weimar era cabaret, dance delicately with the incalculable twists and turns of insanity. It’s a beautiful thing.

More appropriately, the Deadfly Ensemble are Luc Lanthier and James Powell, with studio production by Ashkelon Sain (previously Trance to the Sun) with guest appearance by Andi Sex Gang.

This CD is available direct from the artist via their website."

Recorded and engineered by Lucas Lanthier and Bonzo von Ecke at Armada Haus in Ventura, CA except for tracks 1, 12 and 13 which were recorded and Engineered at Floodzone Cave Machine in Portland, OR by Ashkelon Sain

sndtrak stops by with an Album of the Day Feature of his most recent release, FLIPS V1: Triple Lindy